Home Safety - In Wagatsuma lab at Kyutech, a postdoc researcher David Chik demonstrated a brain-inspired robot for the maintenance of home safety. The robot has 5 functions: (1) autonomous navigation (2) keep track of people and objects, and store the observed information in a working memory system in real time (3) contextual reasoning: analyse and associate the pieces of observed information so as to make prediction on physical attributes that cannot be observed (4) attention to sudden movement (5) identification of risky situations.

EvilTurtle Wins RoboMagellan at RoboGames - Mt. SAC Robotics Team placed first in RoboMagellan with their "Evil Turtle" robot. Evil Turtle runs RoboRealm on-board. The Evil Turtle was the only robot this year that was able to reach the Finish Cone.

NXT Humanoid - The demo shows a humanoid version of Lego Mindstorm NXT can follow a ball automatically. This is possible by (1) ball tracker and control algorithm embedded in RoboRealm, (2) a modified humanoid with a USB camera. The robot is controlled through Bluetooth.

GardenBot - GardenBot was created to help carry heavy tools, dirt, fertilizer, etc. around the yard by following an orange bucket carried by a person. The creator of the GardenBot designed the system to be used by his wife who carries her lightweight tools in such a bucket while gardening. Check out the link to see the prototype system in action! More information can be found at the following forum link. 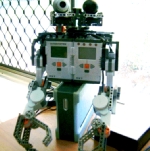 CJ Wisse - Daryl - Daryl (Data Analyzing Robotic Youth Learner) is a humanoid based robot based on the Lego NXT kits. Incorporating multiple programming environments including vb.net, nbc and RoboRealm Daryl is a great example of why robotics can be a very rewarding challenge!

Robot auto lineup and docking - Computer vision (Roborealm) on a tablet PC and an Arduino mega to control the robot with two fiducials at different depths, to determine how much on the left or on the right of the docking station the robot is.

Geeks_Build_Stuff Roomba - A detailed guide to retrofitting the Roomba into a sophisticated robot.

Autonomous Underwater Vehicle Team - The Autonomous Underwater Vehicle Team from Southern Polytechnic State University. Their mission is to give students the opportunity to challenge themselves and gain hands-on experience in science, technology, engineering, and mathematics. Students should be able to apply the theories they study in school and learn to work as a team. They have competed in the Association for Unmanned Vehicle Systems International (AUVSI) Autonomous Underwater Vehicle Competition. Teams from universities around the world participate in this annual competition. Each year students must build an autonomous submarine that can complete specific tasks designed by the AUVSI. To do this a team of talented and motivated students see the entire design process through. They work throughout the year designing, building, and testing their underwater vehicle. This year they are building a completely new AUV.

Whiteboard Erasing Robot - Ben Graham's very unique entry for the Trossen Robotics contest. His entry is a whiteboard cleaning robot. The goal of the project was to create a robot which could erase written text on a whiteboard completely autonomously i.e. no human interface. RoboRealm helped to identify the written text on the whiteboard so the robot could be as efficient as possible in erasing text. We're crossing our fingers and hope he does well in the contest!

Leaf Project - Leaf looks for a fiducial and can then calculate angle and distance information using the x-rotation and size of the Fiducial. He knows where he is in the room based on where the fiducial is located and using some trigonometry relative to the Fiducial is able to move to a specific place in the room about 3 feet in front of the door. Switching to the AVM module, he can navigate through the doorway successfully without hitting anything!

Once in the hallway, navigation is accomplished by stopping when his sonar sensors detect the wall. He is then programmed to turn 90 degrees clockwise. He then finishes by going down a short narrow irregular hallway (previously a difficult challenge).

RoboShasta - A senior design Proposal from the University of Houston to create a robotic version of their official mascot a cougar named Shasta (She has to). Team members include Kyle Clifton, Mike Canuz, Marlon Belleth, and Major Jomah. The robotic head includes movable eyes, two axis head rotations, a functional jaw, and an audio system. The unit can function in demonstration mode, tracking mode and user mode.

ATOM - The First Full-Sized Humanoid Robot in the United States - The first self contained Humanoid robot made in the USA by Dan Mathias. The ATOM-7xp humanoid robot is an almost 8 year project powered by the VIA Nano, Intel ATOM 330 processors and Microsoft 7 - XP and C++ for AI. Check out this superbly built robot that was made without the resources of corporate budgets. It is a fantastic example of what innovation you can achieve in a small business home based lab. Please consider donating to help this impressive project move along.

Bicycle Robot - Autobalance and steering Bicycle Robot by STRI robot team. The bicycle was developed to compete in the Bicyrobo Thailand competition. The competition challenge was to build a bicycle robot that could balance and run by itself. The team made it to the quarter finals and also received the Excellent Technique Award.

Lynxbot - Lynxbot was built to test software for a large 300 lb robot named Ethel. The Lynxbot was built using a Lynxmotion SSC-32 servo control board and a BoeBot Chassis. After that a usb hub to my laptop and a usb camera was added to the robot. Read more here.

Pick And Place Robot - Delta type robot for a pick and place cookie application using CodeSys for motion and RoboRealm for vision.

BrainBot Fiducial Recognition - Brainbot is driven around the yard (via R/C) and whenever he sees an "object" that he recognizes, he says the name of that object. Fiducial recognition is done using RoboRealm...

DeathBot Vision Tracking - The robot is programmed to follow a red disc. A webcam on an Asus Eee PC running Roborealm provides the vision system. An Arduino is used to control a 2X25 Sabertooth motor controller.

SCARABot - A Checkers Playing Robot - A team of engineering students created a robot capable of intelligently playing a game of checkers. They chosen to modify a SCARA robot used in the wafer processing industry as the platform for their project.

RTB (Recon Trax Bot) - Pc controlled tank like bot made using RoboRealm plus a velleman K8055 interface board and some spare parts.

Pi Robot - (By Patrick) In one of the cutest robot videos that we've seen Peppy uses his head mounted camera and range sensors to locate the target (green or red balloon) in 3-dimensional space.

API Wrappers Classes - Rud Merriam has put together a great extension to the C++ API methods by adding a couple classes that make working with RoboRealm Variables easier. Check out his blog at Mystic Lake Software for that and other interesting technology development.

Hexapod RoboVision over IP - Hexapod, Eyera Anubis, is spider-like robot with robotic vision using RoboRealm. 3 Degress of Freedom, 3 leads on each limb (Coxa, Femur, Tibia), that determine the mechanics of movement. Additionally 2 drives provide Pan & Tilt on the camera. A total of 20 servos. .

BOL-BOT Waypoint Navigation with RoboRealm - The Bluetooth Controlled BOL-BOT Kit will allow robotics enthusiasts to control their BOL-BOT via Bluetooth and use it with packages, such as the Machine Vision RoboRealm software package and the Microsoft Robotics Studio virtual robotics environment platform; all with application notes, etc.

RoboRealm control of an I-Sobot - ProfMason wrote a brief tutorial on how to use the USB-UIRT in roborealm to control an I-sobot, but the instructions generalize to just about any IR controlled robot.

Ben Hoad's Blog - During a very boring week at college Ben acquired a novelty USB rocket launcher. The idea of being able to shoot people from the comfort of one's desk was appealing at first but became old fast, partially due to the sheer difficulty of aiming.

Micromagic Systems' Hexapod Colour BLOB tracking - The tutorial shows the basics of using RoboRealm to control the HexEngine via a bluetooth link, along with the use of a wireless CMOS camera attached to the pan/tilt head to track colour BLOB's. The tutorial will also work with a pan only head, and a wired camera if a wireless type is not available.

Line Following Spykee Robot - He's on a role! ProfMason shows how he got the Spykee to follow a line even with a 90 degree turn!

Color Tracking Spykee Robot - ProfMason shows how he got the Spykee to patrol between two red WowWee cones!

iRobot Create Personal Home Robot - A personal home robot built around the iRobot Create platform and a mini-itx computer system. It has never been easier and more affordable to design and build robots by leveraging the economies of scale from the software, PC, toy and other high volume consumer industries. This robot was created to show people that with a bit of imagination and ingenuity, robots can be used for real useful work around the home to make our lives more convenient and entertaining.

Robot Arm: Phase 1 - The goal for the software is to guide the arm's end-point to a location we select arbitrarily. The main idea is for the robot to continually look at his own arm, and make decisions on how to move it to closer to its goal, until it ultimately achieves it. This allows for greater flexibility because you don't need the software to contain a precise mathematical model of your robot's structure prior to running it. Instead it can learn about itself, and infer this structure on the fly.

Owen Sound Real-time Weather Conditions - This is, perhaps, the only autonomous real-time snow gauge currently operating on the internet. It employs a Linksys WVC200 network camera pointed at a length of 2˝-inch PVC pipe painted fluorescent orange. The pipe is held upright by an outdoor umbrella stand with its sleeve painted orange to match the PVC pipe.

BFF Wi-Fi Bot - The BFF Wi-Fi Bot, as its name suggests, is a robot that can be remotely controlled over your standard home Wi-Fi network from a joystick attached to a fixed PC.

Mindstorm NXT + Eee PC = Good Times - A robot using the NXT as only an interface from the motor’s/sensors to the Eee PC using RoboRealm.

My Butler Robot - Ever wanted a butler robot that talks to you , follows you around , and even pours you drinks? Eric is extensively documenting the building process amoung other things in his ongoing blog.

JCP1 - A Java based DIY automaton! A quest for a robot as an assistant for human beings by John Christian Lřnningdal.

Wizard Robotics - Lego NXT, RoboRealm and XBox 360 controller Demonstrating the use of a XBOX 360 controller, Lego NXT robot, RoboRealm software. Posted are a few building instructions and detail images in case you wish to build the Lego NXT vision rover yourself.

Autonomous + Teleoperated Robotic Rover by Aaqil Khan The aim of this project was to design and build a 4WD differential drive rover with integrated robotic arm capable of autonomous operation with obstacle avoidance and object detection.

LaserLife - DIY project by Luke Travers Investigating the possibility of constructing a computer mouse that operated in a 3d environment.


Know of something that should be included in this list? Then please contact us and let us know!